Any death caused by negligence, error, or improper action by another person is legally considered a wrongful death according to Arizona state law. The causes of these types of deaths range from medical malpractice, to falls, to car accidents. Statistics show that there are dozens of wrongful deaths per year in the state of Arizona alone.

Death and Mortality Rates in the United States

In 2017, preventable accidents ranked as the number three leading cause of death in the United States. According to these statistics, only heart disease and cancer had higher death rates than unintentional incidents that resulted in a person’s death. Preventable accidents may not have been the number one cause of death nationwide, but accidental injury contributed significantly to the high death rates of specific age groups.

Statistics show that gender is also a significant indicator when it comes to the demographics most susceptible to unintentional injury. Data from 2017 shows that 7.6% of male deaths in the U.S. happened as a result of accidental injury. In contrast, 4.4% of female deaths resulted from the same cause.

Leading Causes of Wrongful Deaths in the United States 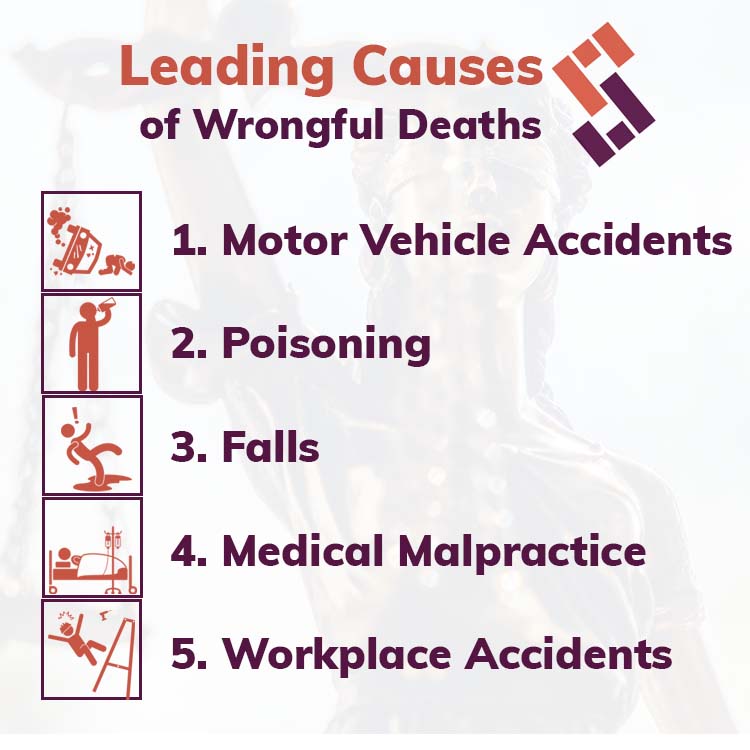 In 2017, 169,936 people died in the U.S. as a result of unintentional injury. The types of accidents typically cited as wrongful deaths are almost always preventable. A few prevalent factors contribute to the soaring number of wrongful deaths.

Further statistics from 2017 show that, at the time, vehicle accidents were the number one cause of death in 11 states. They ranked number two in 21 states, and number three in 18 states, as well as in Washington DC.

Figures from the National Safety Council show that motor vehicle accidents were the number three cause of preventable injury-related deaths in Arizona at the time of these statistics. The data reported 14.5 vehicle-related deaths per 100,000 people living in the state, and only poisoning and falling surpassed the mortality rates for such accidents.

Poisoning is one of the most common causes of wrongful death in the United States. Any death that occurs as a result of drugs, medicines, gases, vapors, and other toxic substances falls under the category of poisoning. Note that any type of food-related poisoning is classified as a disease death rather than a poisoning death.

Whether a victim trips and falls or tumbles from a second-floor landing, those falling deaths are counted by the same statistic. Any fall that happens when boarding, getting off, or being within a transport vehicle is not classified as a wrongful death of this kind.

Diagnosis errors, surgical mistakes, and any other sort of neglect by a medical professional can have disastrous results for a patient. Medication errors, like dosage miscalculations and erroneously giving a patient the wrong prescription, also account for many of these avoidable deaths.

Any mistake made by a medical professional, including those mentioned above, may fall within the scope of medical malpractice. If a patient dies as a result of such an error, then it may be grounds for a wrongful death lawsuit. These lawsuits are especially beneficial for surviving family members of the victim because they can provide much-needed compensation for expensive medical bills and funeral costs.

Certain lines of work, such as construction and factory jobs, are more prone to workplace accidents. Wrongful deaths in the workplace can happen as a result of many factors, including falls, vehicle-related accidents, exposure to harmful substances, and hazardous working environments. If the death of an employee is determined to be the result of employer negligence, the incident can be reported as a wrongful death.

Falls and motor vehicle accidents accounted for the second and third most prominent cause of preventable death in Arizona. Looking at preventable injury-related deaths overall, Arizona had a total of 4,184 deaths during 2017. Victims aged 15 and up accounted for most of these deaths.

Statute of Limitations in Arizona

In Arizona, the statute of limitations for injury and wrongful death is two years. Therefore, a surviving spouse, child, or parent can take legal action against someone else within two years of the victim’s death. Personal representatives of the individual and the deceased person’s estate may also sue for wrongful death.

Arizona Revised Statutes Sections 12-611, 12-612, and 12-613 are great resources to learn about the fundamentals of filing a wrongful death lawsuit in Arizona. They explain the most important points regarding these types of lawsuits, what damages can be awarded, and when the trial can take place following the death.

Although some states allow other types of common survivors to file a wrongful death claim, Arizona does not legally accept claims from the following individuals:

Of the survivors eligible to sue for wrongful death, only a single plaintiff may represent those survivors as a collective group. According to A.R.S. 12-612, any financial restitution is to be distributed among the survivors proportionate to their respective damages. The court decides the extent of those damages in relation to one another.

Arizona Revised Statutes serve as a guide for how the court should account for the damages. It considers multiple factors, including the survivors’ financial dependence on the victim and the emotional damage that resulted from the death. Medical, funeral, and burial costs also play a factor, as do the victim’s past and projected future earnings.

By taking all of these variables into account, the court can finalize an appropriate amount for compensation and determine how to distribute it between the survivors. According to the statute of limitations, this amount is not subject to the debts and liabilities of the deceased person, unless their estate is the one receiving it.

If you wish to file a wrongful death claim in Arizona, the first step is determining your eligibility to do so. Arizona Revised Statutes Section 12-611, 12-612, and 12-613 provide the basic guidelines for who can file this type of claim and what you can expect to happen throughout the court proceedings.

After you determine that you fit the requirements to file a wrongful death claim, you must follow the statute of limitations for it. In Arizona, you may file a claim within two years of the victim’s death(other rules may apply when the liable party is or works for a government entity). After that, the court is not legally obligated to hear your case.

If you have any uncertainty as to whether you qualify as the plaintiff for a potential wrongful death claim, seek legal help. Having the right legal advice and representation is one of the most significant advantages you can have when suing for wrongful death. That way, you and other survivors of the victim have the best odds of getting the compensation that you deserve.