The Definitive Guide to Wrongful Death Lawsuit in Arizona Arizona, like all the other states, has passed legislation that addresses wrongful deaths and offers recourse to family members in the state’s civil court system.

In general, wrongful death suits are a form of personal injury suit where the injured party was killed. As with personal injury lawsuits, the party responsible for the death is liable for damages.

If you’ve lost a loved one to an accident that can be shown to be the fault of another party, you are well within your rights to file a wrongful death suit.

However, filing a wrongful death lawsuit can be a difficult task, so it’s best to speak to a lawyer who is experienced in handling wrongful death cases, and understand the process before you start.

What Qualifies as Wrongful Death?

Section 12-611 of the Arizona Revised Statutes defines wrongful death as a situation where, if the injured party had not died, there would be enough evidence to file for a personal injury suit.

The party liable for the death can be held for damages if death is a result of a “wrongful act, neglect or default.” To put it simply, if you could have filed a personal injury suit against a party, but the victim has died instead of being injured, you can file a wrongful death suit on behalf of the victim.

An important aspect of wrongful death is that death can be the result of intentional or unintentional conduct by the negligent party. For instance, a situation where one person intentionally hurts another person, and the victim subsequently dies from those injuries can be treated as wrongful death. Death could also be the result of negligence, such as failure to fence off a public swimming pool in which a child subsequently drowns.

The cornerstone of a wrongful death suit is proving the negligence of the guilty party. Courts define negligence as acting in a careless way that causes injury or death to another person. Negligence is composed of four elements showing the accused acted in a negligent matter: 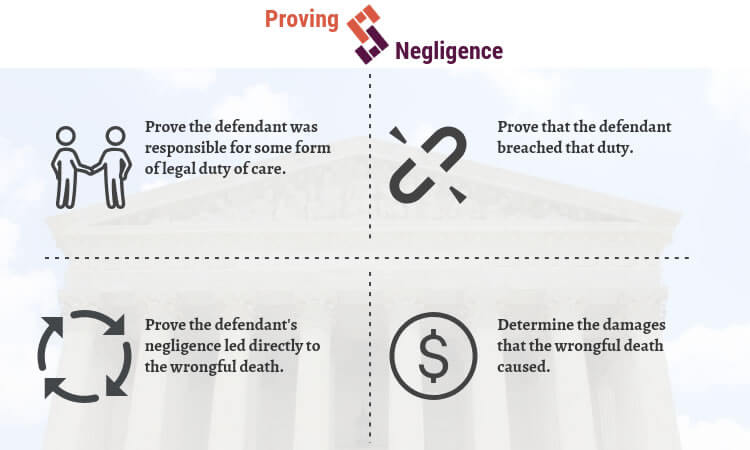 The first step in any negligence case is to show the defendant was responsible for some form of legal duty of care. These legal duties are obligations one person has to another to keep them safe from harm. For instance, doctors have a legal duty to care for patients to the best of their ability. Employers have a legal duty to their employees to provide them with a safe working environment. If you drive a car with a passenger in it, you have an obligation to operate the car safely and with a level of care to prevent an accident.

Once the relationship between the plaintiff and the defendant is established, there needs to be evidence that this duty was breached, either intentionally or unintentionally. A breach can be defined as doing, or not doing, something that a reasonably prudent person would do in the same situation. “Reasonably prudent” is  a legal term that defines how an average person would act.

A breach of duty occurs when the defendant acts in a manner that a normal person wouldn’t, knowing that it could lead to negative consequences. For instance, running a red light can be considered a breach of duty, as every motorist has a duty to obey traffic rules and laws.

It’s not enough to show that the defendant breached their legal duty. You also need to show that the negligence led directly to the wrongful death. Negligence that doesn’t lead to injury or death can’t be prosecuted. In practical terms, just because a person ran a red light doesn’t mean that they can be held liable for a traffic accident that wasn’t directly caused by them running that light, such as the victim’s brakes failing.

Secondly, the court must show that the defendant could have reasonably foreseen the consequences of their negligence. If the act is deemed unforeseeable, then the defendant may not be found liable.

The three above elements are enough to establish whether or not the defendant was negligent and thus liable for the wrongful death. The fourth element is to determine the damages that the wrongful death caused. Damages are usually calculated and paid out in a settlement agreed upon by both parties.

Who is Immune to Wrongful Death Cases?

In some cases, the government may be considered immune against a wrongful death suit, even if you can show that their negligence caused the wrongful death.

According to state and federal statutes, the government can be immune from a  wrongful death claim in the event of the following: 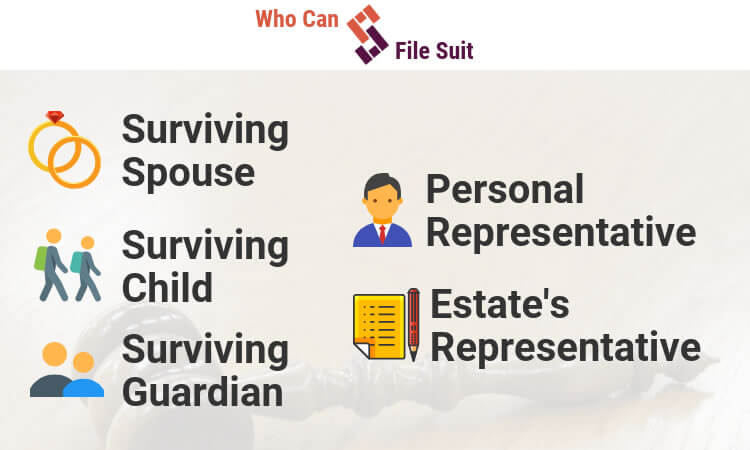 Who Can Sue for Wrongful Death?

In Arizona, there is a limit on who can file a wrongful death claim. The parties that can file such a claim are limited to:

Who Gets the Money in a Wrongful Death Lawsuit?

Who gets the money, in the end, will depend on who filed the claim. If  the estate of the deceased files the claim, the estate receives the damages and pays them out to the family as directed by the will. If the survivors file the suit directly, they will be paid directly. Sometimes, it may happen that the deceased has not left a will and the surviving family cannot come to a consensus regarding who will be the personal representative. In such an event, the court has to intervene to resolve the dispute.

What Damages Can Be Claimed in a Wrongful Death Lawsuit?

Calculating damages can be one of the most difficult aspects of a wrongful death claim. In general, damages are divided into two main parts: the losses inflicted by the person’s death to the estate, and damages suffered by the family members as a result of an untimely death.

The first category is usually paid out to the estate and then distributed according to the deceased’s will. These damages typically include:

The second category is paid directly to the family members and includes losses such as:

Working out the specific damages that are available depends largely on the plaintiff. For instance, if the plaintiff is a spouse or child, they may seek damages for the loss of care and guidance. If the plaintiff is the estate of the deceased, it won’t make sense for them to seek the same type of damages as they aren’t affected in the same way as the family member.

How Much is a Wrongful Death Lawsuit Worth?

The Arizona Revised Statute Section 12-613 provides the foundation for calculating wrongful death damages. It’s important to note that the statute also states that damages awarded aren’t subject to the debts and liabilities of the deceased unless the compensation is going directly to the estate instead of the family.

When damages are awarded, the court uses several variables to determine an appropriate level of compensation. The major variables include:

It’s difficult to give a hard figure for damages in a wrongful death lawsuit, as the circumstances of these suits vary so much.  Each case is different and evaluated individually. The worth of each lawsuit can differ significantly.

How are Wrongful Death Settlements Paid Out?

A wrongful death suit is always filed by a single plaintiff who represents all survivors able to file the action. If the plaintiff represents the family members of the deceased, the Arizona Revised Statute 12-612 states that compensation is allocated to survivors according to the “proportion of damages” as determined by the court. If the plaintiff represents the deceased’s estate, then the estate receives the compensation, where it is viewed as an asset of the estate.

What this means is that wrongful death settlements can be paid out directly to the deceased’s estate, or paid out to the survivors of the deceased. The court determines the proportion of the settlement that every member receives. The court takes into account the proportion of damages that each individual has been subjected to and makes the determination based on this proportion. Children of the deceased, particularly dependents, are more likely to get a higher percentage of the settlement due to their financial dependency on their lost parent.

Is Money from a Wrongful Death Lawsuit Taxable?

In general, the IRS considers damages from claims involving wrongful death to be compensation for physical injuries, which means they are tax-free for the survivors of the deceased. However, the settlement may be taxed if it pushes the value of the deceased’s estate higher than the federal estate tax exemption. Luckily, Arizona doesn’t have an estate tax, but the federal exemption may still apply if the estate is worth more than $11.18 million.

Punitive damages, on the other hand, are not considered to be compensation for physical injuries by the IRS, since they are usually awarded to punish the defendant. They are subject to income tax laws and must be reported on your next income tax return.

Tax law is complex at the best of times, so it’s a good idea to discuss your settlement with a qualified tax professional before committing to anything. They will assess your situation and determine what the tax implications of the lawsuit or settlement will be.

In general, wrongful death lawsuits can take a long time to complete. However, even though the process may seem glacial, you need to be aware of state deadlines and statutes of limitations.

For instance, in Arizona, the statute of limitations on a wrongful death lawsuit is within two years of the deceased’s death. If you miss this deadline, the court can reject your claim outright.

While two years may seem like a long time to prepare a lawsuit, you’ll be amazed by how quickly that time can go by. It’s a good idea to file the lawsuit as quickly as possible, not only to meet the state’s deadline, but also to preserve the evidence of the case. Eyewitness accounts and memories may fade over time, which can make showing negligence more difficult in the long run.